Groot Constantia – A testimony to survival

Two World Wars, the Boer war, the Great Depression, the Spanish Flu, the Bubonic Plague, the British invasion of Cape Town, The Great Storm of 1865, the earthquake of 1809, the Rinderpest, several droughts, fires and pestilence are just a few of the historic challenges that Groot Constantia, as South Africa’s oldest wine Estate, has witnessed and survived in its 335 years of existence.

The Manor House – then and now

And now the Covid-19 pandemic that is sweeping the globe causing mass illness, deaths and economic turmoil is the latest crisis to present itself for inclusion in the history books, and to throw unprecedented challenges at our modern society.

“South Africans are feeling the brunt of National lockdown as we attempt to flatten the curve and protect our citizens from this virus. Wine farms have been hard hit as we have not been able to welcome visitors to our doors, nor sell our produce,” explains Jean Naudé, CEO of Groot Constantia.

“However, as a witness to the testimony of how wine estates can adapt and survive – indeed thrive – after periods of crisis, my message to those in the wine industry is to have patience and faith that we will overcome this current crisis and open our doors again to the public, resume wine sales, as well as retake our position in the world market as a leading wine producer.”

The Manor House – then and now

“A tangible example of how adversity can be successfully overcome is found in the Manor House at Groot Constantia, which was originally built in 1685 and is now an Iziko Museum and the starting point to the unique Visitors Route Experience. In 1925 the manor, which had been modified over the years, was severely damaged by fire but was then meticulously restored and refurbished – maintaining it for future generations to come and allowing visitors to the Estate to catch a glimpse back in time,” says Naudé.

Groot Constantia is a Provincial heritage site and the Estate is a living, but working, museum that attests to how people and businesses can adapt and survive terrible adversity. 335 years later Groot Constantia has an uninterrupted record of wine production and the hand-produced traditional wines continue to win many awards on the global stage – well over 100 top accolades in the past ten years alone. “We have worked hard over the years to build up our wine reserves and are thankfully sitting on a very precious stock of award winning red wine that we will continue to market to the public once we are able to.”

Naudé explains that recognising the need to protect visitors and staff, Groot Constantia closed its doors to the public ten days before the National lockdown. The Estate was however able to complete their 2020 harvest, using strict measures to keep staff distanced and protected, and the wine making team say that the harvest looks very promising for this years vintage, particularly the Chardonnay, which is no stranger to accolades. The 2013 vintage was named Best In The World and the 2017 vintage won Gold at the Chardonnay Du Monde Awards, Double Platinum at the 2018 Top 100 Wines Competition, Gold at the 2018 Novare SA Terroir Wine Awards and Gold at the Michelangelo Wine Awards.

The Cloete Cellar – then and now 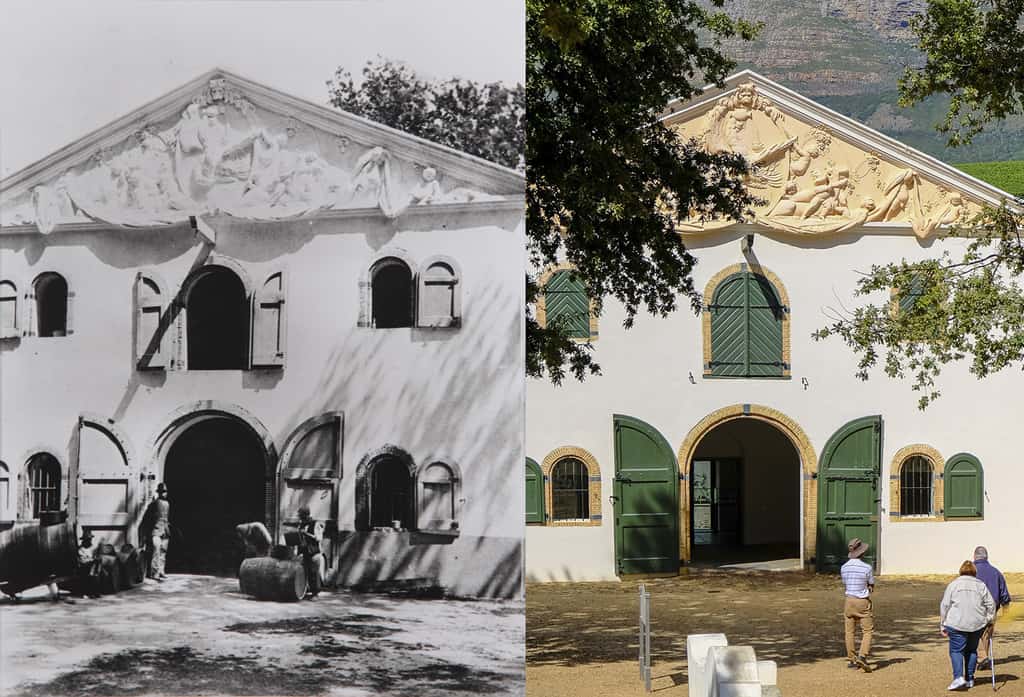 “As the custodians of a business that is one of the oldest brands in the world that has endured so much in its centuries of trade, we at Groot Constantia want to say that South Africa will overcome this latest crisis, we will survive and endure – together.”

“We are greatly looking forward to opening Groot Constantia’s doors again to the public and to welcoming visitors who can immerse themselves in the history of our beautiful Estate, enjoy our award winning wines and a delicious meal at one of the two restaurants,” says Naudé. “We also look forward to continuing to present the rich heritage of the South African wine industry to the world.”