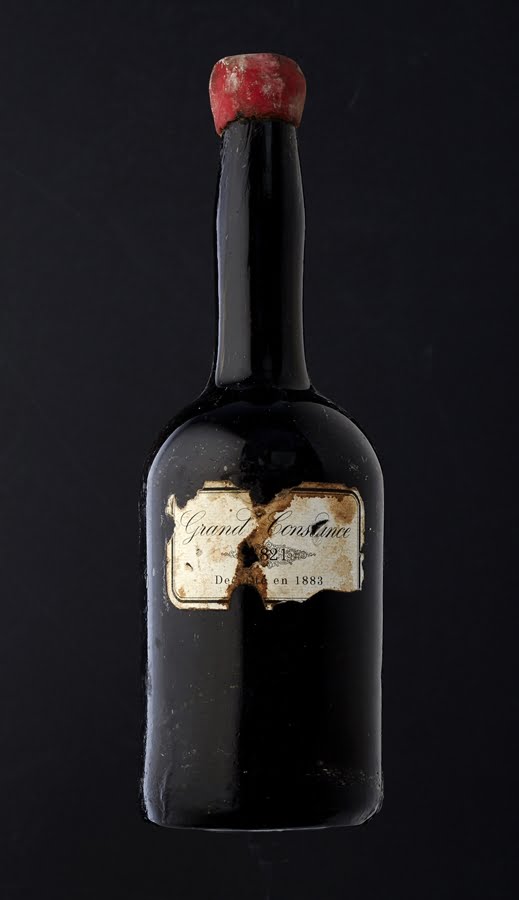 Grand Constance 1821 on auction “One of the most precious, scarce and coveted wines in the world” on auction at Cape Fine & Rare Wine Auction 2021

An exceptionally rare bottle of Grand Constance 1821 – once destined to be part of the exclusive collection of Emperor Napoleon Bonaparte, and one of perhaps only twelve remaining in the world – will be auctioned at the Cape Fine & Rare Wine Auction (CFRWA) on 22 May 2021.

The CFRWA is the Cape Winelands’ most exclusive wine auction, allowing bidders access to South Africa’s finest and rare vinous finds, and this, a once-in-a-lifetime opportunity to secure what has been termed a ‘unicorn wine’ by international wine collectors.

This opportunity comes exactly two centuries since the slowly ripened and raisined grapes for the vintage were harvested from the vineyards of Groot Constantia, and in the period between then and now, this investment wine has gained a royal pedigree and noble provenance – and has become a highly coveted piece of viscous treasure.

Niel Groenewald, Managing Director of Nederburg and head of the CFRWA, said: “The opportunity to present what is arguably one of the most precious, scarce and coveted wines in the world at the upcoming Cape Fine & Rare Wine Auction is an incredible moment in our recent past. A treasure of this calibre presents itself perhaps once in a lifetime, and anyone lucky enough to secure this wine at auction will be rewarded with an unbelievable valuable piece of wine history.”

By 1821, Constantia wine was arguably at the height of its fame, universally known ‘to soften the temper of ministers, and to sweeten the lips of royalty itself’.

From Frederick the Great of Prussia to Louis XVI and Marie Antoinette of France, from American founding fathers George Washington and John Adams to Britain’s mad King George, possession of ‘the sweet, luscious and excellent dessert wine’ was craved by all.

Constantia had even made its way into popular fiction, with English novelist Jane Austen endorsing ‘its healing powers on a disappointed heart’ in Sense & Sensibility, published in 1811.

The ‘celebrated’ vineyards of Constantia gained a steady following since its establishment in 1685, with international demand for its wines quickly exceeding supply. On allocation was its “exceptionally good, divine and enticing in taste” sweet wine, the Grand Constance, with much of the 1821 harvest on target to ship to St Helena, where for five years it had been reserved for the exclusive enjoyment of Napoleon – a bottle a day, in fact! However, the exiled emperor died on 5 May 1821 – his last request a glass of his beloved vin de constance – which resulted in a supply of Grand Constance 1821 vintage to enter the market.

Today it is believed that there are fewer than a dozen bottles of Grand Constance 1821 remaining, and it is noteworthy that they all bear a label stating ‘décanté en 1883’ – the use of French suggesting that the wine was decanted if not cellared in France.

The bottle that will come under the hammer on 22 May as part of a lot auctioned in London in the early 1980s. The head of the wine department at Sotheby’s, Patrick Grubb MW, was asked to place a bid on behalf of his South African friends at Stellenbosch Farmers Winery (Distell today). “Luckily we got the wines for a very special price,” recalls South African wine historian and judge, Duimpie Bayly.

Since then, three 1821s from that lot have been stored in the Tabernacle at Distell’s Adam Tas production facility. These ‘time capsules’ had their only outing in 2019 when they were recorked during a meticulous recorking clinic overseen by experts, sommelier Jean-Vincent Ridon, CEO of Amorim Cork, Joaquim Sá and leading wine authority, Michael Fridjhon. This process not only aimed to prolong the wine’s already venerable lifespan, but to also check and ensure that the precious liquid’s pristine condition remains intact.

The Grand Constance 1821 is presented in its original, hand-blown glass container, a delicate and rare shape which is something to behold:

“From the late 17th century, black glass was produced to protect bottle contents from light exposure and spoilage,” says Sá. “Traditionally coal was added to give it a dark colour (not true black but a dark green or amber). In the old days, bottles were continuously recycled. The one selected for the upcoming auction seems to have been produced using the rudimentary free-blown process, which was used until the mid-1800s.”

Fridjhon, who has had the privilege of opening a few 1821s for VIP tastings says “The 1821s are different from the stocks which came from Alnwick Castle [labelled as White Constantia 1791]. One that I opened was very visibly red before quickly turning amber in the glass.”

“This bottle of Grand Constance 1821 is a national treasure for the wine industry,’ says Sá. “It is a piece of history for the whole of Africa,” adds Ridon.

Christie’s auctioneer Charlie Foley, who will be manning the gavel at this year’s auction is exceptionally excited about the opportunity to auction the Grand Constance 1821: “As Napoleon breathed his last on St Helena in 1821, the grapes for his favourite wine were just ripening on the vine. The chance to acquire and drink a bottle of wine 200 years after its birth, is sensational. I can only imagine the honeyed, spun sugar and hazelnut depths of this wine. Very few bottles of this wine still exist and for the CFRWA to have one up for auction… A true unicorn wine!”

The estimated price for the Grand Constance 1821 is R80 000 to R130 000. Bidders can register to bid on this exceptional item by registering online at capefinerarewine.auction.